Keys to Literacy continues in the BHS World Language Department 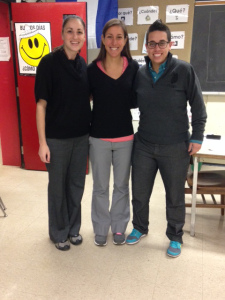 This year, the World Language Department has been excited to implement the strategies that the Keys to Literacy program offers.  Last year, BHS began working with Keys to Literacy trainers and the World Language Department discovered that the resources they have to offer complement our daily lesson plans in meaningful ways.
Spanish teachers, Ms. Duhamel, Mrs. DiCroce and Profesora De Sousa, have experimented with Top Down Webs in their Spanish III classes.  Students were presented with a vocabulary theme that focused on reflexive verbs and daily routines.  After reinforcing the vocabulary using resources, such as two column notes, students read a short story about two kids named Débora, a Puerto Rican, and Hipólito, a Bolivian.  To organize the information read in the target language, Spanish teachers modeled the use of Top Down Webs.  They created a Top Down Web exemplar that outlined the daily routine of Niko, a character from a video that acts out his actions during typical day, and, then students completed the web based off of the notes that they took while watching the video (see student Top Down Web example: la-rutina-de-niko-1).  In sum, the Top Down Web helped students organize information and compare it to their own daily routine.
In addition, Spanish teacher Mrs. DiCroce examined the literature of Débora and Hipólito using Bloom’s Taxonomy.  Students created questions based off of the reading using the various levels of the Bloom’s Taxonomy ladder, ranging from remembering information to creating new details or ideas.   Using the various stages of Bloom’s Taxonomy taught students how to enhance their level of reading comprehension through applying information to daily life, analyzing the concepts through comparisons and contrasts as well as creating alternate scenarios. (see student Bloom’s Taxonomy example: la rutina de Débora).
Also, Profesora De Sousa continues to explore the use of Two-Column Notes in her Spanish classes.  For example, her Spanish II classes have begun organizing their grammar concepts, such as the present tense of -AR, -ER, and -IR verbs using the Two-Column Notes template.  In class, her students organized and categorized the important information pertaining to each idea while using colors to compare examples.  (Check out the example: repaso-1-apuntes-de-2-columnas)
Lastly, Ms. Mirabella taught Top Down Webs and two column notes to her 7th and 8th grade Spanish classes at MSMS. 7th graders were introduced to Top Down Webs in her Spanish class with a general example (a daily routine), and after, students were told they would use webs with their unit on Spanish speaking countries. After Ms. Mirabella created a blank web with only regions listed (i.e. North America, South America, etc.), students filled in the countries that speak Spanish under each region. Students used these webs as part of their study guide for their unit quiz on this concept.
In 8th grade Spanish classes, Ms. Mirabella introduced the family members vocabulary. Students first filled out a “green light, yellow light, red light” work checklist (Word Knowledge Checklist). On this sheet, students noted how much knowledge they had about each vocabulary word about members of the family in Spanish. If they knew what a word meant in English, they wrote the definition in the green light column. If students had heard the word before or have seen it, they wrote whatever they knew about that word (i.e. noun) in the yellow light column. If students had never heard or seen the word before, they simply checked the red light column. After discussing the results of the worksheet, the vocabulary was formally introduced. Next, students completed Two-Column Notes with this vocabulary. In the left side of the notes, students wrote the word in Spanish, and drew a small picture underneath. Across from that on the right side of the page, students filled in what the word meant in English, any synonyms and antonyms for the word, and then used the word in a sentence in Spanish. Overall, students were interested in trying these new strategies, and will continue to use them throughout the year in future units and chapters!
Many of the strategies presented during the Keys to Literacy workshops last spring and this fall have motivated the World Language teachers to explore the resources and collaborate with each other to recognize which tools best support our language students.  Most notably, the strategies that the students are developing in their language class will support them in all classes throughout their learning experience at BHS and beyond.